A short guide to the dogs attending the festival

When the Arvamusfestival says it is open to everyone in Estonia and beyond, one’s first thought usually would not to extend beyond the human species. But when we say inclusive, we mean inclusive: the festival was one of the first in Estonia to allow dogs to attend. You can set your eyes on a dashing dog at almost every discussion and around every corner.

Note: this is not Muki who preferred to remain unphotographed. Photo: Kärt Vajakas

When I set foot in the official ‘pooch park’ of the festival, I found two festival volunteers ready to attend to dogs wanting to rest from the hustle and bustle of the festival… but no dogs. Where were all the dogs? At the festival, of course! I spoke to Muki (or well, his owner), a charismatic but camera-shy creature attending both days of the festival. As Muki prefers the company of people to other dogs, he chose to experience the festival proper all through the two days. Muki is not the only one too excited about the festival to take a breather – the dogs participating in the festival are often present at the discussions themselves or strolling around the tiny lanes and paths around Vallimägi and town centre.

What kinds of dogs have found their way to the festival, and what are they looking for?* 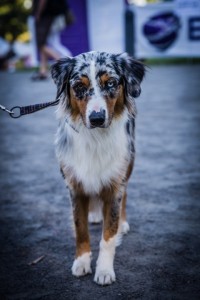 If you can’t already tell by the stern look, this dog means serious business, and is here to soak up on all the discussions have to offer. I spotted their motley fluffy coat at several discussions about start-ups. While thinking big thoughts, is sure to impress everyone around – but they are too focused to notice that they are making a fuss.

The First-Timer is very excited to be at the Arvamusfestival, and though it is their first time here, they are certain to return again next year… and the one after the next, and the one after that. In fact, they are so excited about everything happening that they hardly make it to any discussions. Because there is so much to explore, so much to grasp, so many friends to see, to even think about standing still! And they love every bit of it.

They love the ambience in Paide and make good use of the hammocks dotted around the festival area. This is also a great way to mingle with friends old and new, and soak up the discussions from a reclined position and with a relaxed mind. Let ideas drift through you and truly feel the festival. 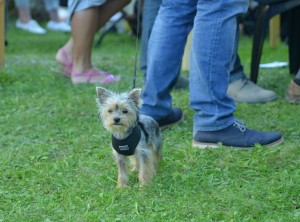 Although there are well over 200 discussions taking place at the festival, they seem to have attended a good quarter of them. And the morning yoga. And the Black Poodle party last night (but that one mainly to see why it was named after poodles when smaller dogs are obviously the better breed). There is no way to explain it: some dogs simply manage to do everything.

Alright, this goat is technically not a dog, but they like to be the face of ‘different’, even among the fourlegged kind attending the festival. They represent the new directions the festival is taking. Just like the festival welcomes a true mix of people, the animal scene shows just how colourful and vibrant the Arvamusfestival 2015 is.

*Please note that these are the mere speculations of the author of the piece, and do not represent the personalities of the individual dogs depicted .